If you’ve been following along here, or any of my freakish status updates on Facebook, you may know that I completed my first ever Half-Marathon this past Saturday, October 29, 2011. It was the Miami Beach Halloween Half Marathon, and believe it or not, it was a lot of fun. I bought a discounted red shirt from Sport Authority, found some left over black fabric from an old quilt project, some iron-on Heat-N-Bond, pulled out some black tool from old costume, and some pipe cleaners….and about an hour later voilå! Lady Bug. 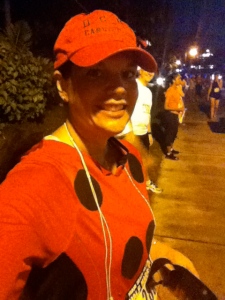 When I signed up for this back in July, I knew I would have a lot of work to do. We had just moved back from North Carolina to South Florida, and I had become a smoking, drinking, couch potato. Eastern North Carolina hasn’t met a food they won’t deep fry. In the past 5 months of early morning, dark, soggy runs, I have learned a few things about this process – and probably myself. Here are a few of them.

I can’t wait until the next one, I’m considering signing up for another Half Marathon in February. I’m afraid that without a deadline, I will fall back into my couch potato ways. I didn’t – and don’t –  really give a shit about my time, just about finishing. It’s a lot of fun to run MY race, not anyone else’s.

2 thoughts on “What I learned from my first Half”