If it doesn’t stop raining around here, I’m going to have to rename this blog “Queen of Crafts”. We have been indoors for an entire week and I’m starting to feel as if I live in a submarine that only occasionally is granted a glimpse of the sun. And if you want to experience good ‘ole cabin fever with two toddlers, read The Shining. On acid. I’m convinced that Tico, the Spanish-only speaking squirrel on Dora, The Explorer actually uttered the word “Redrum” this week, and that if you listen to the Fresh Beat Band backwards it will instruct you to kill you parents. Listening to it forward – of course – will only make you want to kill yourself.

For this week, I pulled out an oldie-but-a-goodie type of craft: the collage. Lately I have been stockpiling flat canvases from the local craft store as they have been going on sale and the Back to School coupons have been fierce. I also had a pile of old Parenting and Family Fun magazines that had just caught up to me after the last move. So we had plenty of picture fuel. And just for fun, Mommy had 3 back issues of Rolling Stone and the Sweetwater fall catalog.

The first thing that we had to do is go buy some safety scissors. That was the highlight of a rainy morning as it was one of the only times we got out of the house. I asked each of the kids what they wanted to cut out, numbers, letters, etc. I picked anything that had cars, dinosaurs, or any of the old Elmo-standards. Nobody really cared about what was being cut, as long as there was cutting. So, after 20 minutes of me handing them pages with things they might want to cut, they just cut it all up. 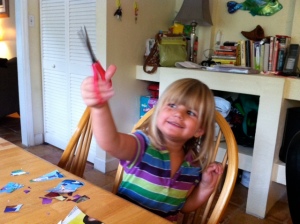 After that, there was another nap for everyone….well, except me. I was still cutting out pictures for everyone. I think I will rename this project “Mommy failed to prep properly”.

After lunch, a nap, a movie, and a longing glimpse towards my wine cabinet, we were ready to “paint”. Ok, you and I know both know that it was not painting, but there was a brush and some liquid being spread on a canvas so it was painting for everybody.

Matilda started the craft just fine. She had fun putting all the pictures on her canvas. Did I mention ALL the pictures? Yeah, she likes her collage like she likes to paint. Lane had fun for the first two pictures — and then decided he wanted another nap. Right there. On the floor.

The project ended when Matilda used ALL — did I mention ALL? – of her pictures on her 6 x 8 inch canvas. Nobody got hurt, so despite it not turning out the way I had expected, I will consider this a successful project.