It’s hard to believe that the summer is half way over. It’s not even July yet. Really. But school in the Sunshine State starts mid-August, and I have to go back a week before that, so we’re a starting our downhill run.

And this summer is like no other, in that I made a choice to have no responsibilities this year: no summer class teach, no summer camps to run, no moving. In fact, this has been the first year since the kids were born that I haven’t been more busy than during the school year. With Matilda starting Kindergarten in the fall, and Lane starting VPK, the months of September – June go by in a blur. I want my kids to remember the summers playing hookie with Mommy – and sometimes Daddy, too. A time when we can all kick back and do the silly-summer things: like make homemade ice cream for lunch. (I had to go to 2 different grocery stores in search of Rock Salt, and when I finally found one that carried it, I began an in-depth conversation with a large group of working ladies and they were amazed I was making ice cream with the kids thus elevating my Rockstar Supermom status.)

But being a full-time summer mom isn’t without its drawbacks: I’m horrendously craving adult interaction. Since the home-mom-thing is new and temporary, I don’t have the built-in playdate structures that other moms cultivate for months or years. I’m starting to miss work, miss being productive and creative, hell – I even miss arguing with my co-workers….BECAUSE THEY ARE ADULTS. I cringe as my childless friends all post about their supremely awesome happy hours and Saturday nights on Facebook.

For me, there are only so many times I can get excited about pretending to be a kitty, folding laundry, or taking 15-minutes to find all the shoes so we can run to the store for a 5-minute item. And even though we go outside everyday, there are still the overabundance of kid shows. Repeatedly. Over and Over. And Over. Again.  Any Mom will tell you: there are some kids shows that you wish you could veto. Secretly, we all wish that Dora lived in Arizona. I never understood before I had kids when my Mom-friend confessed that she fantasized about Steve from Blue’s Clues. I actually understand it less now – unless she fantasized about bludgeoning him to death with his handy-dandy notebook.

So here are the top five children’s shows that I wish physical harm upon:

1. Wonderpets. If you’ve never had the *pleasure* to watch this show EVERY DAY, you don’t know what you’re missing….like a daily visit to the dentist. I once considered puncturing my own ear drum when “the phone, the phone is ringing” – but then I realized I could never unhear those songs in my head so I just said a daily prayer that the kids would outgrow this show quickly.

2. Winx Club. The plot of this Japanese Anime-style girls show has more holes than macramé. And the scantily clad fairies that my 5 year old idolizes I will simply pretend don’t exist.

3. Fresh Beat Band. Its the Monkees for pre-K, I get it. But I hate it. I hate them all: Marina, Kiki, Twist, and Shout. But their songs……CAN’T….STOP…..SINGING.

4. Mike the Knight. This little snot-nose discovers in each episode that he is a rude, selfish little brat. My 4 year old’s attention span usually runs out just before this discovery and he runs around the house imitating all the BAD behaviors. I can’t wait for the episode where the king and queen finally have enough and send him up to the Tower. “By the King’s crown!”

5. Ni Hao, Kailan. This show should be called “Welcome to China, Dora” – since that’s what it is. I know that if I want my kids to compete in a global marketplace, then learning Mandarin is the way to go….But I hate it. I hate it because it’s clone of a show that actually was original. and then there are the really creepy characters: Lulu is a semi-real floating purple dragon that lives in the clouds – but the kids can visit her, Tolee is koala with a unique obsession for all things Panda; and Hoho is an over-sensitive little monkey.

These shows probably aren’t too bad, really. Try could be freakin’ Shakespeare, and I would still hate them if they were the only thing that I could watch for the next month. 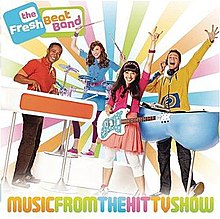 Update: The Fresh Beat Band are coming in concert this fall. Guess who is going?